One autumn month in New York

View 7 months of places and faces on tom_e_free's travel map.

As I flew off from the English autumn heatwave, my slightly delayed JFK bound flight was remedied over the tannoy by the captian announcing in true American style that we would just 'burn more fuel to get us into New York on time'. Sure we did, and as we approached the airport (and me being fueled up with complimentary wine and Ginger beer), a smoggy Manhattan skyline appeared in the distance. It was here that the reality of this 7 month solo adventure hit me. New York was a city I visited a couple of times when I was younger, and immediately fell in love with. Even though incredibly excited, I was slightly apprehensive as to whether it would live up to the memories I had of it as a teenager.

The airport shuttle battled it's way into rush hour Manhattan, which provided a glimse of the bustle as we dropped off other arrivals at hotels throughout the island. My hostel was last; the HI New York on the upper west side. Supposedly the largest hostel in North America with 600 beds, it's atmosphere like the streets outside was electric and on the evening of my arrival, a welcome party was hosted which helped overcome the jet lag and meet some of my fellow hostellers. This also gave me the opportunity to get used to the financially damaging custom of tipping in the US, which included giving a $1 tip for each drink ordered at the bar. It eventually became second nature, and usually resulted in stronger drinks and wads of $1 bills from bar staff who obviously wanted to encourage it. 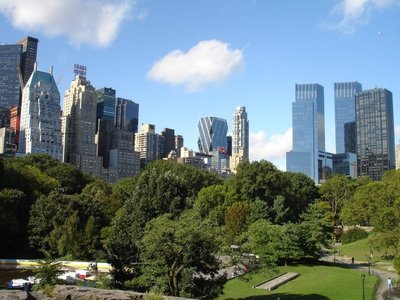 My first weekend in the city involved rambling the streets, finding my bearings and learning the ways of New Yorkers. My hostel was on 103rd street, so 103 blocks from the bottom, but the metro soon became an easy and exciting way to work my way around Manhattan and the three joining boroughs. I came to New York with a couple of aims to achieve during my stay. My first was to walk around as much as possible day and night to take in as much of New York life as possible. Areas of the city which stuck with me of course included Central Park, which became a second home to me during a brief heat wave we had during the first week of October. It became a great place to watch eccentric New Yorkers and their pets as well as row around its lake and spend hours getting lost in the ramble. Another favorite area in Manhattan became Greenwich Village, characterized by beautiful houses and streets and obscure shops selling everything from puppies in windows to baby human skeletons (really quite bizarre...). Nearby to this area was one of my favorite urban spaces; the 'high line', a converted suspended rail way line which used to bring food and post into lower Manhattan. Faced with demolition, it was converted a few years ago into an incredible urban landscape of green and sitting areas, allowing walkers to wonder through the lower streets of Manhattan suspended two floors above the city floor and bustle. 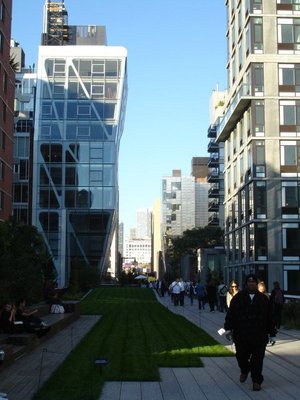 A final favorite borough of mine was across the river in Brooklyn, and in particular an up and coming youthful area called Williamsburg. Again, this was home to plenty of great shops and bars; my favorite being 'Brooklyn Bowl', a bar complete with love music and bowling alleys.

My second aim was to watch and hopefully get the opportunity to play some jazz.
My first jazz experience came on the evening of my first Monday, at 'Cleopatra's Needle' jazz club near my hostel on the Upper West Side. Following a recommendation from my lonely planet, I headed over and watched a trio warm up the stage for what I then found out to be a late night jam session to come. Excited by the prospect I hung around, and after talking to one of the musicians, asked if I could play for a couple of numbers. Being a jam session, I was welcomed up as 'Tom the Brit', and we started playing one of my favorite jazz standards; 'Maiden Voyage' by Herbie Hancock. I got into it, and as I walked away it hit me that I had just fulfilled one of my dreams to jazz drum in New York. I walked home buzzing. 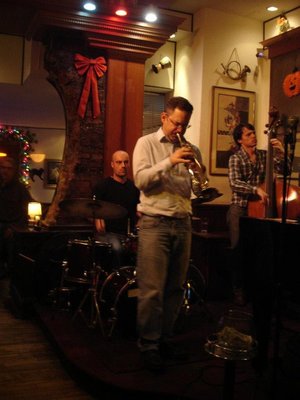 This was the first of seven jazz gigs I would go to in NYC. Two other venues became my favorite jazz haunts. First, was Dizzy's Club Coca Cola (sell out name , Dizzy) which was located five floors above one edge of Central Park. A diverse range of jazz was accompanied by huge windows displaying the night cityscape scrawling out behind the stage. The other jazz club favorite was 'Smalls', an underground club in lower Manhattan which lived up to it's name. This was your stereotypical NY jazz club; accessed by a flight of steps from the above bustling street, and a place where the bar rumbled when a nearby metro train went by. Being so small, this meant it was also loud and their very own jazz cat could sometimes be seen scurrying away from the screaming band. Another loud jazz experience came during by visit to 'Birdland' jazz club, where I went to watch their awesome big band. To my surprise, I was sat next to the stage (which was great for watching the drummer and leader, Tommy Igoe), but even more surprise came when I saw the prices on the menu. I ordered the $10 cheesecake (for a slither), but it was certainly worth it. 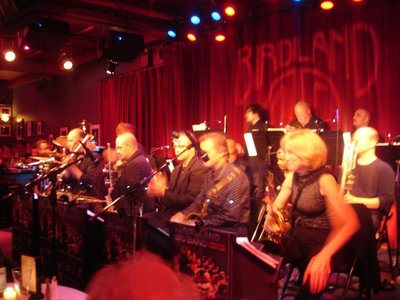 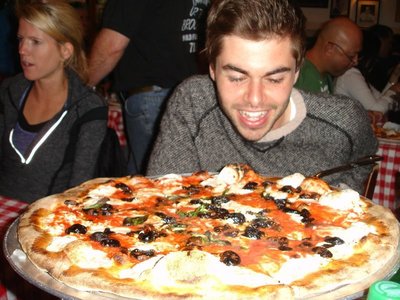 Another musical highlight came in my second week when I watched the re-vamped Brooklyn Philharmonic with Brooklynite rapper Mos Def. The set was awesome, but the real highlight came from the location which was the Winter Garden at the World Trade Centre; a huge greenhouse with towering palm trees in, overlooking the river Hudson on one side and the developing World Trade Centre site on the other.

Having a hangover from the student life, admittedly a lot of my time in this cultural melting pot was spent learning and mainly in the wealth of amazing museums NYC had to offer. During a few days of straight rain in my second week, I spent my time hovering between them. 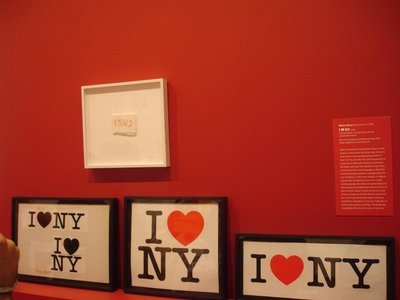 Particular favorites included the Tenement Museum in East Village; a 3 floor tenement preserved and fitted out in its original 19th century style. I also went on an interactive tour here which involved us tourists being asked to talk about our family and their experience of American immigration. I didn't have much to offer, but the Americans on the tour more than made up for it. I also stumbled upon several lectures during my time here (yes, I missed them from uni). Highlights included talks on mental asylums in the US (which was interestingly held in a church...) and also a talk on urban beekeeping (interesting as beekeeping had been illegal in NYC until recently). And I have some strange interest in bees. 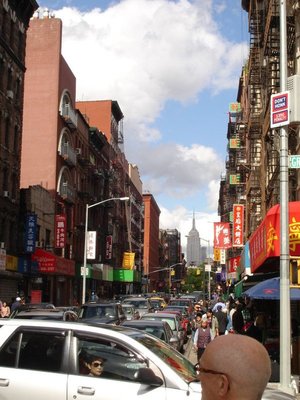 A relatively solitary few days in museums was remedied by a visit from a dear old university pal, who came out to NYC for a week. I loved showing him around the city I had got to know, and he introduced me to Chipotle, a Mexican Grill chain who made addictive burritos. Thanks Niall, after our first encounter here, Chipotle became a regular haunt across all of the American cities I visited.
Niall and I shared a few more bromantic encounters over food. Notably, Katz' Deli which served mountains of pastrami held together by two tiny pieces of bread. A sweeter occasion came when we decided to visit Junior's cheesecake shop, famous for setting the cheesecake standard. Things quickly turned sour as for some reason we decided to buy an entire 10'' cheesecake, halve it, and see how much we could each devour. Taking my cheesecake seriously, I managed to eat half, whilst my challenger managed a modest slice. That was dinner sorted anyway. 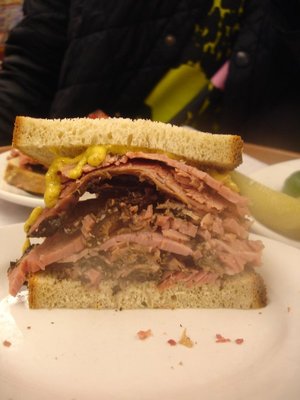 Perhaps one of my best times in the city came at the end, during my final five days following a lively weekend in Washington DC. Having already had 3 weeks here, I'd already done the 'best' bits, and felt like I knew the city pretty well, so just chilling out and taking in the city was on the agenda. I stayed at a lovely little hostel again on the upper west side, half a block from central park and the metro, on a quiet and leafy street. The hostel itself was an old house, with big staircases and rooms, and cozy corners. This was a stereotypical upper west side New York place.
Unfortunately, during my stay the hostel was 4/5 booked up with a French school trip, meaning that the backpacker population was poorly represented. Luckily however, the great staff opened up and looked after us (which included trying to inject some of the Halloween cheer into us). 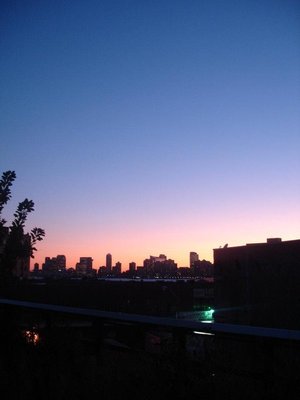 My final weekend in the city involved a number of exciting contrasts. Halloween fever took over the whole city, and a memorable experience came from riding the metro home after a night out, with each metro car becoming transformed into mini Halloween parties with singing and dressing up taken to the max. This was all quite different to what I would expect in London. It was of course impossible to resist a good old Thriller sing-a-long too.
The following morning I woke to good news; an unexpected distinction for my MSc. (I'm sure you're wondering how with some of the spelling mistakes in this post...). I was extatic, and on cue to help the high began a twelve hour flurry of snow throughout NYC. This was an incredible contrast to the day previously which was sunny and crisp, and I had spent with a friend at Brighton Beach; an incredible sandy beach 30 minutes from Manhattan. The snow transformed Manhattan into a freezing lake which brought it to an almost stand still. Streets also became littered with branches who were unable to take the weight of the snow, meaning that Central Park had to be closed and a greatly anticipated pumpkin festival cancelled. 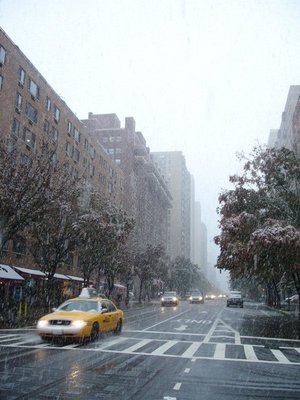 This, all topped off with some great company at the hostel provided the perfect end to my month in NYC before my trip continued westward to Chicago via a 20 hour train journey.

All in all, I feel I managed to fulfill everything I wanted to do in NYC and came away knowing the city and its corners in depth. I missed the city as soon as I left, but didn't come away feeling as though I could live there. I knew that being a tourist would be quite different to an inhabitant, and decided I missed the experiences with people I had met and the freedom I had as an external tourist the most. 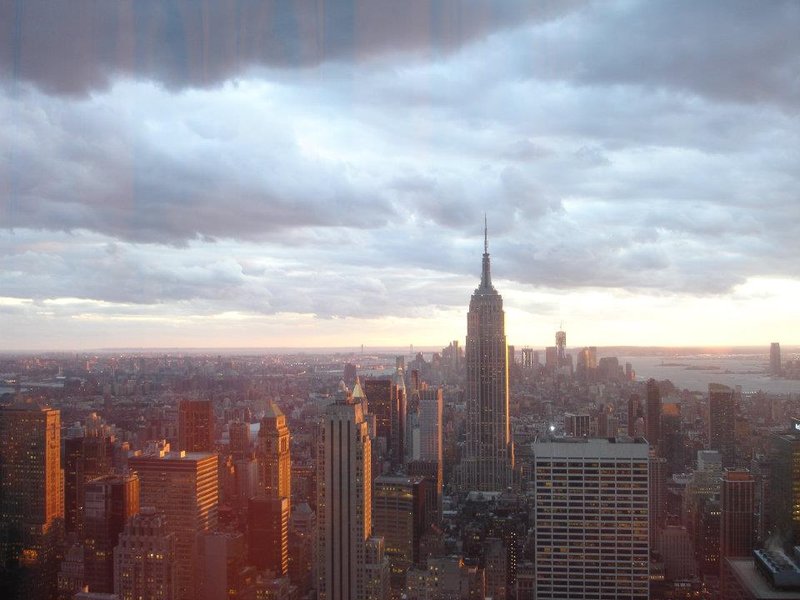 1. The High Line - Old suspended railway recently converted into awesome urban landscape above the city.
2. Williamsburg in Brooklyn - Trendy 'Billyburg', home to cool shops and bars such as Brooklyn Bowl, and an incredible view of Manhattan.
3. Smalls jazz club - tiny underground jazz haunt complete with their very own jazz cat. 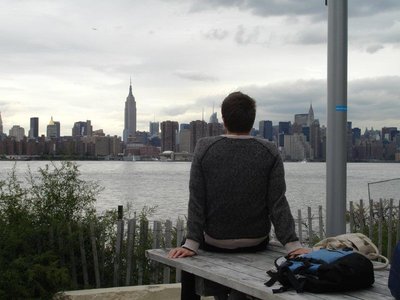 Next Table of contents